Why your business needs to be more like the Betoota Advocate 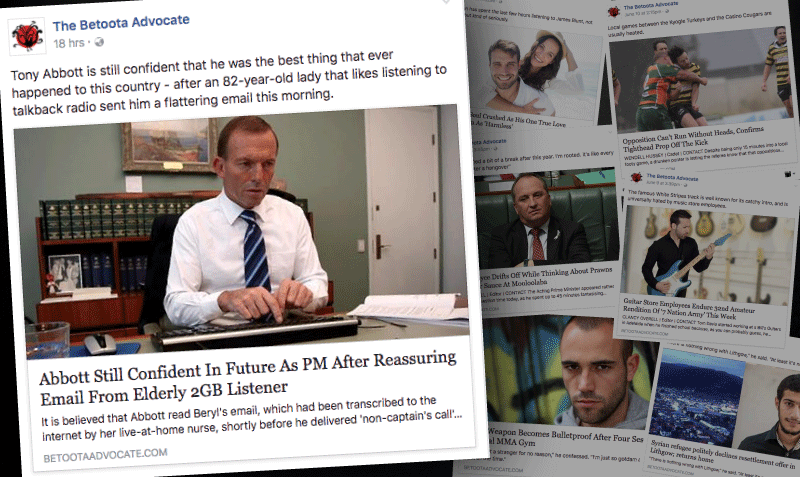 I write this blog with love in my heart and an acute awareness that marketers tend to ruin good things when they touch them. So it is that I use a steady, careful hand to tell you why your business needs to act more like Australia’s highest-circulating online newspaper, The Betoota Advocate.

If you’re already a Betoota fan kudos to you – you are a winner and deserve praise. If you’re not, just know they are the greatest thing to happen in this country since Hawkey nailed that schooner at the SCG or when that Aussie bloke invented the dual-flush toilet, or when Hawkey undoubtedly nailed a schooner on a dual-flush toilet.

Here’s their Facebook page so you can check them out for yourself, and believe me when I say I wouldn’t blame you if you bail out now and spend the rest of your day scrolling through their perfectly executed content feed.

But here’s the real stuff. According to traffic estimator website SimilarWeb, The Betoota Advocate’s website drew in 1.9 million visitors organically in October 2017 and about 1.1 million in December (a traditionally slow month). About 90% of their traffic comes from Facebook organically (you can read here about why that is an enormous feat in itself) and their on-post engagement is like no other brand I’ve seen in Australia.

And when I say your business needs to be more like them, I mean just that. I’m not suggesting you start a comedy website. But what you can do is learn from their approach to social media, content, conversions and an audience-defined product.

Tell an awesome backstory – you have one

It’s all down to your content tilt, that thing you do differently to anyone else. There are plenty of satirical news sites around – The Shovel, SBS Comedy (RIP), The Chaser, Clickhole – but none are quite like The Betoota. And I don’t mean they’re not as good, it’s that each is authentically different.

Basing the Betoota’s content tilt geographically is genius, because it instantly paints on them a unique, country folk personality. And then they smash your preconceptions to bits.

Did you know Betoota is a ghost town in western Queensland and officially has a population of zero? But Clancy Overell and Errol Parker, the fictitious editors-at-large of the Betoota Advocate, have made the township of Betoota into a thriving, insane country populace through content gems such as Man revvs the guts out of his XR8 to celebrate axing of Yassmin Abdel-Magied and Relief As 4th-Grade Captain Arrives In Taxi Five Minutes Before Kick-Off.

Basically, we all know someone like the protagonists in a Betoota Advocate article.

If you’re a keen reader, especially if you’re from or have lived in a country town, the core ideas will resonate and the links they create between current affairs and the actions of the folks of Betoota are ingenious.

They also revel in hanging out to dry their city counterparts and politicians, made all the more funny and engaging by the context of their rural backstory. See Acting PM Barnaby Joyce Drifts Off While Thinking About Christmas At Mooloolaba, Prawns.

The Lesson: Find your content tilt. The backstory of your brand is crucial if the rest of your content strategy is to make an impact. Abandoning boring corporate speak and finding a brand voice different to that of your competitors is no longer an option, it’s essential.

Publish consistently and build an audience that loves you

And boy do the people love the Betoota. But that’s only because The Betoota Advocate consistently delivers incredible stories that resonate emotionally with its audience, a group to whom the writers and editors are truly committed. Their copy is simultaneously riddled with punctuation errors yet remains witty and sharp, and they engage with commenters, answer messages and flat-out tell you when they are doing something for the money. It’s the kind of trust only purely authentic storytelling delivers.

More impressive is they don’t spend cash to promote their content. The Betoota’s organic engagement on Facebook would be the envy of any brand (especially after the recent algorithm change), and engagement matters. Unless you’re a business whose marketing is solely focused on transactional leads and sales (and if you want to survive long-term it shouldn’t be), having an audience that engages qualitatively with your content is key. And like the Betoota Advocate, it’s important to drive them to your owned digital assets – your website, your subscribers list.

It’s provocative, it’s funny, it drives readers to their website and the engagement is purely organic – that’s the power of audience-focused content.

The Lesson: Commit to your audience wholeheartedly and deliver them helpful, entertaining content. Use that content to drive them to your website or app (here’s my explanation about why that is crucial). However, be sure to align your strategy to your business objectives.

Tap into your audience (now that you know what they want)

Not all businesses have the luxury of building an audience before they decide what they’re going to sell, but it certainly helps to have a huge group of emotionally invested people telling you what they want from you. But it takes time.

It looks as though The Betoota Advocate has taken a slow and steady road towards monetisation so as to not piss off their audience with commercial messages. Yes, they have Google Adsense ads on their site that might deliver a bit of cash, but the real opportunity is in monetising themselves (live appearances, a TV show perhaps) and being branded content creators, for which they can charge a premium for having such a highly engaged, high-quality audience on tap.

They’ve already delved into this territory, creating this with GROW Super (language warning).

One of the most interesting things was the audience response, with 150,000 views, nearly 3000 reactions, 548 comments, nearly 300 shares and comments like this:

That kind of audience engagement only comes from truly loyal fans, and that is what the Betoota has built. Would GROW Super get a tonne of leads or sales from this? Not straight away. But it quite cleverly inspires audiences to investigate their brand further, putting highly engaged consumers into a nurturing pathway. It’s smart, and more brands should look to this type of content partnership to tap into committed audiences.

The other product The Betoota boys have delved into is their own beer, Betoota Bitter. It’s on tap at a stack of pubs and they consistently travel around the country to hold launches when it enters a new bar. Is it a money spinner? That’s a hard one – the craft beer market is highly geographical and crowded. Is it supposed to be a money spinner? Maybe not. It could just be more quality content helping to engage their fan base further down the marketing funnel.

The Lesson: Let your audience tell you what they want from you and listen closely – you may create a highly engaged group of people frothing to buy your wares.

Can any brand do this?

Content marketing isn’t for everyone, and before you delve into it strategy is key. Yes, every brand can create content but the leap to content tactics without first documenting a content strategy can be dire.

The Betoota Advocate probably didn’t have a documented content strategy (I may be wrong) but their founders are also journalists and a former ABC executive producer who know how compelling, entertaining content builds an audience, a brand and a product.

So can any brand do this? Potentially. Should they? That is a deeper question that pushes into business culture, resource allocation and the drive to outsmart your competitors.

But if you’re going to do it, be like the Betoota. Here’s hoping one of their next headlines is “Marketing wanker tries to go viral off the back of ill-advised blog post”. I probably deserve it.